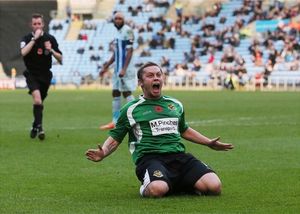 Huck Nets Goal Of The Season

SEAN GEDDES found out he was a winner at our National Game Awards whilst eating his dinner – in Spain!

The Worcester City midfielder was unfortunately unable to attend our awards event at Craven Cottage due to a family holiday in Minorca.

But that didn’t stop him from checking on Twitter to see who had walked away with Huck Nets Goal of the Season award.

It would be hard for anybody to say Geddes didn’t deserve it for his unbelievable Rabona chip against Barrow in the FA Trophy.

“I was away on holiday but I was eating my dinner and refreshing Twitter so it felt like I was there!” he said.

“People have said it was a fluke but it’s the second time I’ve scored a goal like that. I scored a similar one for Walsall’s youth team against Oxford. Now I’m aiming for the hattrick.

“Just after the goal  Worcester offered me a new contract so if I can score another one, maybe a new deal will be on the table!”

Not many Non-League players receive as much national attention in their careers as Geddes has this season alone.

Known for his goals from his time at Stourbridge, he showed his predatory instincts in the FA Cup, netting twice as Worcester knocked out 1987 winners Coventry City at the Ricoh Arena.

But the tough tackling 23-year-old, who was a youngster at Manchester United alongside the likes of Danny Welbeck and Ravel Morrison, had to go one better.

Beating Barrow in the FA Trophy third qualifying round isn’t news that would normally rock the world but Geddes rose to the occasion by scoring one of the best goals ever seen in Non-League football.

Taking a long ball down with his right foot, he turned back onto his left and nonchalantly chipped the ball over keeper Aaran Taylor with a Rabona from just inside the penalty area.

Footage of the incredible strike soon went viral on the internet and has been viewed almost two million times!

“Playing in NonLeague football, you don’t expect people in other countries to hear about you but I’ve got a friend who lives in Norway and he couldn’t believe it when he saw it!” Geddes added.

“We had that great FA Cup run as well so it was a good season for me and a few more people now know my name.”