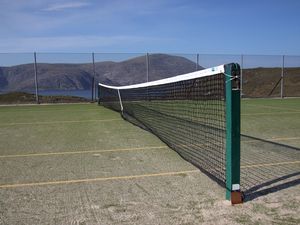 The tennis court at Bunabhainneadar on the Isle of Harris must be the second-most photographed court in the UK after Centre Court at Wimbledon.

So here’s the funny thing: when you Google “Harris Tennis Court” why do all the pictures of this extraordinary place (and there are dozens) show no-one there? We have seen the picture takers taking pictures of us. On the court. Hundreds of times. So have other court users. So why the absence of humanity?

The answer probably lies in people’s love of the peculiar. It is just far more bizarre to show this outlandish tennis court – right out there in the middle of nowhere, for goodness sake! – completely unpopulated. Like a ghost arena, beamed down to earth by impish extra-terrestrials with a wacky sense of humour.

But like so much you see on the web, it isn’t the truth. The tennis court at Bunabhainneadar in Harris is indeed an oddity, touted as the “most remote tennis court in the UK, if not the World”. However, it is used. Summer and winter (except Sundays). By real people, not extra-terrestrials. And it is only fair that the outside world should know.

Not only is there tennis played, by visitors and locals, but there are fitness classes, rehabilitation sessions and circuit training; Pilates, yoga and Swiss Ball. It has been used by toddlers and pensioners, the able-bodied and the physically challenged. One man even drove all the way from Italy to play on it. Four friends flew in from Argentina for a game.

In fact the uses to which the court are put are far more diverse than were ever envisaged back in 1994 when plans for its construction were first set in motion. In that year my wife Peggy and I ran the tennis section of the Lewis & Harris Sports Festival. We commandeered the hangar at Stornoway Airport, painted a court on the concrete surface, put up a net and waited for entries, expecting them to come from Stornoway and the surrounding area.

We were surprised, then, to receive forms from the Mackinnon family in Scadabay, Harris. The children of the house were mad keen on tennis, it appeared, and played on a makeshift court (the village road) with a fishing net strung across it. They did well in the Sports Festival tournament and one of them, 11-year-old Colin John, actually won his section.

The Mackinnon youngsters were all fired up and begging for a proper court to play on. Maybe it was time, we thought, to see if anyone else wanted one. Questionnaires went out, locals were quizzed and the answer came back: build one.

We set up a charity, Buna Limited, to run and own the project and launched ourselves into it. Luckily for us the then owner of North Harris Estate, Jonathan Bulmer, was very supportive and he sold us the land for £1. That was the easy bit. Building costs were always going to be high and in the end only one company, now called Ecosse Sports, from Edinburgh was interested in quoting.

The numbers were horrific and the final bill would come to more than £60,000, making it the most expensive single tennis court in the world, according to the press coverage at the time of its opening.

We raised some of the money through grants with £32,000 coming from the Lottery Sports Fund, £10,000 from the Foundation for Sports and the Arts, and £2,000 from the Hugh Fraser Foundation. The rest come from personal donations chivvied and wheedled out of friends and family, acquaintances and their acquaintances. But a big chunk came from the great and good; that is, from people listed in “Who’s Who” listing tennis as one of their interests.

We borrowed the big red books from Tarbert Library and trawled through the minute type winkling out everybody who played tennis. Everybody. In the end we had a list of more than 500. And we wrote to them. This was in the days before email and fax was just too cumbersome. So we wrote. Letters. Five hundred of them.

We offered these dignitaries life membership of the Outer Hebrides Tennis Club for a minimum of £50. Some sent £5 and passed on such an exclusive cachet. Some sent the £50 requested and we duly returned a membership certificate and card (there are some very, very famous members of the OHTC, but they like to keep it to themselves and we promised to do the same).

A small handful of these kind people sent a very great deal more than just £50 and after two nail-biting years we had raised the lot. The court would be built.

Two thousand tons of rock were hauled from the Caen an Ora quarry in North Harris and dumped as a foundation. The court was laid, the fences put up and the pavilion erected. It sounds so simple when you write it like that. No mention of the howling gales and driving snow which kept the workmen in their B&Bs. No mention of the frightening logistical problems and the spectre of rising costs.

Eventually, in May 1998, the court was officially opened in a grand fanfare of national publicity with features in all the papers and coverage on radio and TV. Naturally, things have quietened down a bit in the 16 years since then. We still have to raise money to have the court re-surfaced every eight years or so (£7,000 for the work done this March) and we rely on all those invisible players to do that.

Colin John Mackinnon, that chubby-cheeked little winner from 1994, is now a hulking great chap managing a bank in Eastbourne, Sussex, in the very heart of tennis-playing South East England. He frequents the upmarket John Lloyd Centre. But he does love a game at Bunabhainneadar whenever he is home.

He just wishes that the pictures people take of him playing here would appear on the web: it is so hard convincing his mates down at the Eastbourne club that someone actually uses that famous, weird court on Harris.